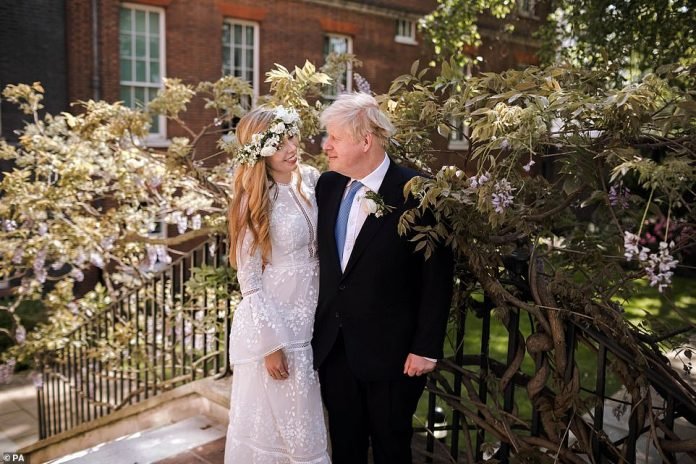 The Prime Minister, 56, has tied the knot with Carrie, 33, in front of a select group of guests making Boris Johnson the first Prime Minister in nearly two centuries to marry while in office.

Carrie, became Boris Johnson’s third wife at 1.30pm yesterday. The couple’s relationship became public just months after Mr Johnson separated from second wife Marina Wheeler in 2018. He and Ms Wheeler have four children together. His first marriage to Allegra Mostyn-Owen was annulled in 1993.

The ceremony at Westminster Cathedral, less than two miles from Downing Street, was the culmination of a six month secret planning.

So secretive were the plans that even senior members of staff in Mr Johnson’s office were in the dark about the Carrie Symonds wedding.

The 56-year-old PM and his 33-year-old bride were only allowed to invite 30 guests at the last minute to the ceremony, thanks to Covid regulations, with bemused tourists ushered out of the building shortly before their arrival.

They later celebrated at a marquee in the garden at Number 10, according to reports, with the couple said to have danced to Don McLean song ‘American Pie’.

There are some leaked pictures of the happy couple, Carrie wore a long white dress with no veil, while the PM looks “very dapper” for the occasion.

In an apparent red herring, Mr Johnson and Carrie reportedly sent out save-the-date cards for June 30 next year. They were the first unmarried couple to live in Downing Street after Mr Johnson became PM in July 2019.

Describing the happy couple, the insider continued: “He was extremely happy as you can imagine, he looked very smart, and was in a very dapper suit.”

“The whole thing has been conducted amid great secrecy and planned meticulously. “It was just their secret and that made the day so special.”

Security was tight around the Catholic cathedral, with staff – who did not know the couple’s identity until the day before – saying there were police “everywhere”.

Details of those invited have been kept under wraps, but Mr Johnson’s dad Stanley and siblings Rachel, Jo and Leo were in attendance.

“The bride and groom are both parishioners of the Westminster Cathedral parish and baptised Catholics.

“All necessary steps were taken, in both church and civil law, and all formalities completed before the wedding.”

He proposed to his partner during a holiday to Mustique at the end of 2019, which he says was paid for by Tory donor David Ross. The Parliamentary Commissioner for Standards, Kathryn Stone, confirmed earlier this month that she is still investigating whether he properly declared the holiday on the private island 16 months ago.

The joyous occasion comes at the end of a troubling week for the PM, with former aide Dominic Cummings making a series of explosive allegations about his handling of the Covid crisis.

Among these were claims he said the virus “only” killed 80-year-olds, and he backed up claims Mr Johnson said “let the bodies pile high in their thousands”.

Mr Cummings also claimed that in February 2020, when the pandemic was becoming a major global crisis, Mr Johnson was “distracted by finalising his divorce, his girlfriend wanted to announce being pregnant and an engagement, and his finances”

And on Friday a watchdog said it was “unwise” of him to have gone ahead with a controversial refurbishment of his Downing Street flat, which was overseen by Carrie.

Today Vaccine Minister Nadhim Zahawi told Sky News he did not get an invite to the wedding.

But he added: “I want to congratulate the Prime Minister and Carrie Symonds on tying the knot.

them that they have really made their marriage vows to one another.”

Mr Zahawi said people should not use the ceremony to speculate that weddings won’t be able to go ahead without caps on numbers from June 21. He said the decision simply isn’t made yet.

Labour leader Keir Starmer posted on Twitter: “Congratulations to Boris & Carrie. Whatever our political differences, I wish them a happy life together.”

Meanwhile Speaker of the House of Commons, Sir Lindsay Hoyle, said: “What pleasant news. I wish the Prime Minister and Carrie well, and hope he has time for a honeymoon!”